More from the Golden Kamuy series: 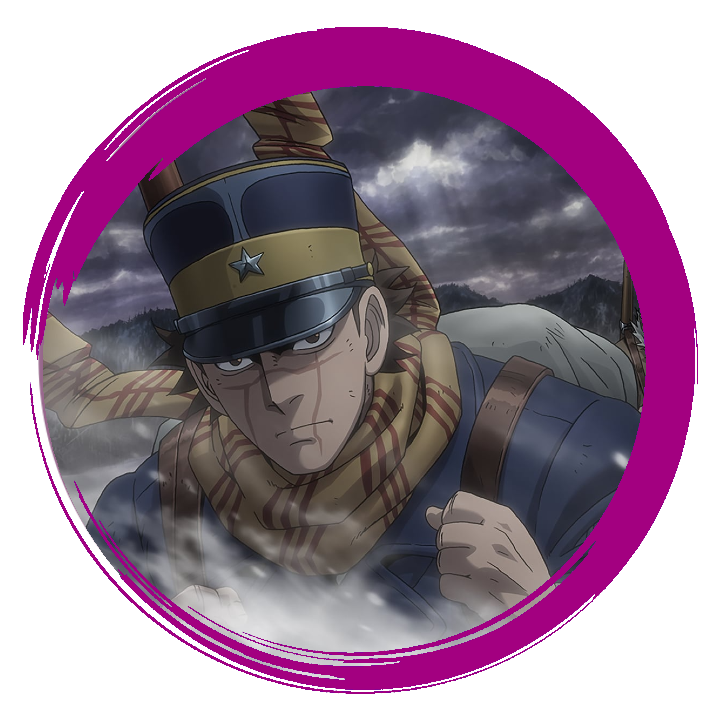 ***Warning, the following may contain spoilers for Golden Kamuy. Reader discretion is advised.***

Saichi Sugimoto (voiced by Chikahiro Kobayashi) is a hardened veteran of the recent Russo-Japanese War. After the horrors of battle, Saichi has come to remote Hokkaido to keep the promises he made to his fallen comrades.

While there, Saichi hears rumors of a missing stockpile of gold. The stash was stolen from the native people of Hokkaido, the Ainu, and the murderous thief was sent to jail before revealing its location. While in prison, the mastermind tattooed a map to the gold onto his fellow inmates. Following a massive jailbreak, the pieces of the map are now scattered across the land.

Seeing this as his chance to do right by his friends, Saichi decides to go after the gold. However, he soon realizes this is a job he can’t do alone.

Saichi comes across a young Ainu girl named Asirpa (voiced by Haruka Shiraishi). Asirpa is also interested in the gold, but not for monetary reasons. Her father was one of the ones killed during the original theft.

With their goals aligned, Saichi and Asirpa prepare to face Hokkaido’s harsh frontier and a neverending stream of dangerous individuals looking for a history-changing treasure.

At the time of the posting of this review, Golden Kamuy will begin its second season in October 2018.

Golden Kamuy was solid, and it is a story I want to see continued.

About a month prior to this post, I covered Tokyo Ghoul:re Chapter 1. There, I didn’t allow myself to be as critical as I otherwise would have been since Tokyo Ghoul, like Golden Kamuy, was split in two. I did that because there was no telling what would lead where. Therefore, I will be operating under the same form of reservation for this review.

Also, like Tokyo Ghoul, I wouldn’t expect a review for the second season of Golden Kamuy until January 2019.

All that notwithstanding, if things stay as they currently are, Golden Kamuy has Tokyo Ghoul:re crushed nearly across the board. Don’t get me wrong, I’m not saying Tokyo Ghoul:re was bad, and I’m still very interested in what will happen with Ken Kaneki, Touka Kirishima, and the rest. However, what I am saying is, the story of Saichi Sugimoto, Asirpa, and the lost Ainu gold has overtaken my attention.

It comes down to simplicity.

Tokyo Ghoul:re was incredibly involved. To be fair, though, I doubt it could have been anything less. Afterall, Tokyo Ghoul:re Chapter 1 was already the third season of the Tokyo Ghoul franchise. Compare that to Golden Kamuy which was starting fresh.

Regardless, that doesn’t change the fact that Tokyo Ghoul:re had a lot of events to keep track of, and an even greater number of names to remember. To follow a narrative as intertwined as Tokyo Ghoul requires focus. It is not a series I would recommend watching casually.

Golden Kamuy, on the other hand, was nowhere near as overbearing. This story is proving to be a lot more straightforward.

Every character in Golden Kamuy had motivations that were simple: Find the gold to accomplish X. From this basic premise, this series managed to build up intrigue. There was no facet to this show that was dull.

On top of that, Golden Kamuy took place during a period of Japanese history I don’t believe I’ve seen in an anime before. The events of this story occurred only a few years after the Russo-Japanese War (1904-1905). Japan, at this time, was about one generation removed from Shogun rule. As a result, guns and gunmen were replacing swords and samurai.

Also, this story’s setting was rural Hokkaido. This was a hostile landscape where only the toughest could survive. If the wildlife didn’t kill you, the bitter cold would. Thus, the only people who could live in this place were either harden soldiers or the local Ainu people who had already called Hokkaido home for centuries.

To recap, Golden Kamuy had hidden gold, gunslingers, harsh wilderness, indigenous people, and a mostly unsettled frontier. No matter how you look at it, this series had the calling cards of an American Western.

If you’re into that genre, Golden Kamuy is the show for you.

Focusing more on the actual story, this was one of those series that was hard to put down. This show was always moving towards a point. There were hardly any moments that felt wasted or lacked purpose.

Golden Kamuy took its time. This series wanted to give a full understanding of what everyone was trying to accomplish, and why they wanted the gold.

A huge part of what made this story enjoyable was none of the main characters’ motivations were based on greed alone. Getting wealth just for the sake of wealth is realistically human, but narratively dull.

Fortunately, the people who mattered in this series had much bigger goals in mind.

Saichi did see the lost gold as a source of income, but he didn’t want the money for himself. Saichi promised he would look after a friend’s family after said friend died in battle. Before the events of this series, Saichi had intended on working hard to keep his word. If he had the time, Saichi might have even disregarded the gold entirely.

Conversely, Asirpa didn’t care about the money in the slightest. She wanted to avenge her father who was one of the ones killed when the gold was first stolen.

The pairing of Saichi and Asirpa was created out of mutual assistance. What made these two work as a team went a lot deeper.

Saichi and Asirpa were experts at what they did. Saichi was a highly trained, battle-tested soldier. Asirpa knew the land and how to survive in it. These two were extremely competent when it came time to fight. Neither of them was dead weight, and neither held the other back. Most importantly, though, Saichi and Asirpa put a lot of emphasis on loyalty.

Over the course of Golden Kamuy, Saichi and Asirpa developed a true partnership. Whenever they fought together, hunted together, cooked together, or traveled together, there was trust between them. When one was in danger, the other would go to great lengths to save their partner.

Aside from the characters and the base story, Golden Kamuy also had grit. This show never shied away from getting violent. There were a handful of brutal scenes; some, as in, more than one, involved a bear. Scary-nature being its own thing, hand-to-hand moments between characters got intense. Most fights weren’t about winning. They were about surviving.

To go along with that, each struggle felt human. There was no magic in this series. Everyone was merely the best at what they did. No one relied on mysticism to win the day. This helped make the world feel a bit more real.

All this led up to potential. I’m not entirely sure where the second season of Golden Kamuy is going to go. As long as the next chapter keeps doing what the first did well, we should be good.

That said, there are a few aspects of this series I sincerely hope get an upgrade.

Going back to something I said earlier: Golden Kamuy crushed Tokyo Ghoul:re nearly across the board.

Golden Kamuy had a better story, better characters, and better pacing than the first chapter of Tokyo Ghoul:re. However, Tokyo Ghoul was unquestionably the better-animated series.

Not to get too far ahead of myself — Golden Kamuy didn’t have awful animation.

The character designs for Saichi and Asirpa were fantastic, and many of the settings and locations looked beautiful. Beyond that, though, everything was either simple, cheap, or a laughably unintimidating CGI bear.

I’m not kidding, the bear was a goddamn joke. This effect might have been passable ten-years ago, but now that we live in a post-Land of the Lustrous world, this was, frankly, unacceptable.

Visually speaking, this was an unremarkable series. Granted, I have never believed animation and artwork are the be-all-end-all to anime. Yes, visuals are important, except a show can make up for low-quality art as long as it has a strong narrative, which Golden Kamuy had.

There was one person in this show that was an excellent example of this. Lieutenant Tsurumi (voiced by Houchu Ohtsuka) had the top half of his face badly scarred due to artillery during the Russo-Japanese War.

Despite that, appearance-wise, the Lieutenant lacked any sense of threat.

Thanks to this show’s animation and art style, the Lieutenant wasn’t the most intimidating person to look at. That was impressive given how half of his face was just gone. Had this show based this character solely around his looks, he would have been forgettable. Luckily, that wasn’t what happened.

With the visuals not doing him any favors, Lieutenant Tsurumi managed to be threatening through his actions and personality. He was a person you wouldn’t want to cross. Not only was he a fierce warrior, but the Lieutenant also had a charisma that brought other strong-willed people to his side. He was someone who created problems for Saichi and Asirpa.

The story of Golden Kamuy carried this series. It painted a world that was rough and treacherous. The people who lived here were the toughest around because that was what they needed to be. There was violence, blood, and death at every turn.

This was indeed not the type of setting one would expect to find a bunch of out of place, emersion breaking anime-style BS.

For those who don’t know what I mean by anime-style BS, I’m talking over-exaggerated reactions, drawn-out explanations of mundane events or items, and overly cute expressions.

You know, the kind of stuff you might find in a slice-of-life series, which Golden Kamuy was not.

It would have been weird for any of those points to appear once in this show, let alone all the freaking time. That would just be stupid.

In case my sarcasm is not leaking through, that was precisely what happened in Golden Kamuy, and it was always frustrating to see.

The worst part is, I fully believe this show’s reliance on typical anime tropes will make a return in the second season. As long as all the other positive points return, though, then this is something I can live with.

I need to answer the same question I asked at the end of the Tokyo Ghoul:re Chapter 1 review: Is it worth getting excited about the next installment.

This series was great. The story was simple, but that was what made it fascinating. The characters’ goals were clear and straightforward. Thus, it was easy to follow them and get invested in their journey. This was well-paced, well-told, and well-set; I wish more shows took place during this time period.

Although the animation of this series wasn’t top-of-the-line, and the amount of anime-ness was annoyingly out of place, I’m still very much looking forward to season two.

Until that time, I highly recommend you check out Golden Kamuy.

But these are just my thoughts. What are yours? Have you seen this show? What would be your advice concerning Golden Kamuy? Leave a comment down below because I would love to hear what you have to say.

More From The Golden Kamuy Series