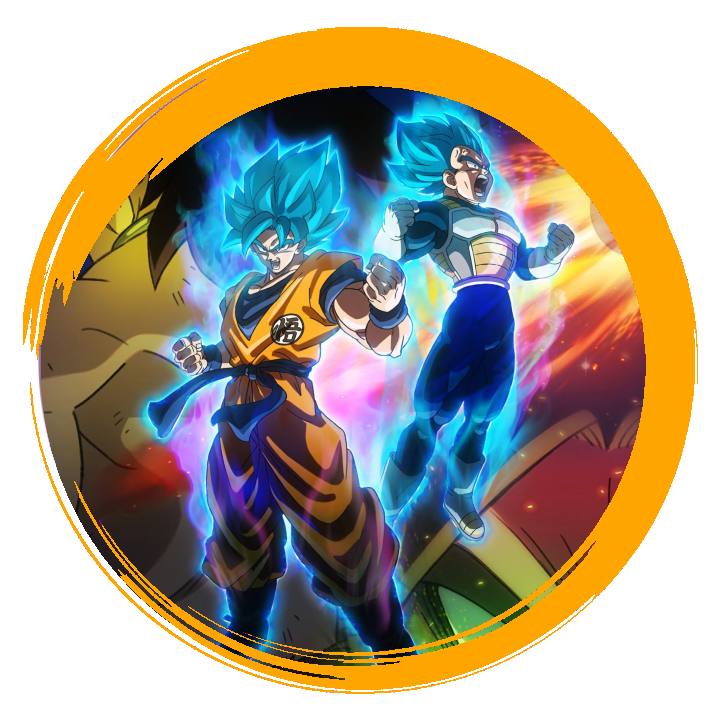 When he was born, the Saiyan child Broly (voiced by Bin Shimada) was outcasted from Planet Vegeta. The leadership feared the boy’s unprecedented power would only lead to destruction. However, in a twist of fate, Broly’s banishment saved him when Lord Frieza (voiced by Ryusei Nakao) destroys Planet Vegeta and the vast majority of the Saiyan race.

Decades later, Broly is discovered and brought to Frieza. The tyrant instantly sees Broly as an opportunity to finally rid himself of his greatest enemy, the now Earth-based Saiyan, Goku (voiced by Masako Nozawa).

Frieza arrives on Earth and unleashes Broly on an unexpecting Goku and his partner, the Prince of All Saiyan, Vegeta (voiced by Ryo Horikawa). The fight that ensures pits the three greatest Saiyan warriors in a battle to rival the gods.

For the record, I have not seen a second of the Dragon Ball Super anime. I plan to someday, but for this review, there may be details I overlook or disvalue. Still, I was interested in Dragon Ball Super – Broly (Broly) because I grew up on the original Dragon Ball and Dragon Ball Z series.

Additionally, this review is a follow-up to Anime Hajime’s Out and About: Eigakan – Dragon Ball Super Broly. You don’t need not read that post to follow what is being said in this one (but if you are so inclined, who am I to stop you). The only thing you should know is I thoroughly enjoyed Broly when I watched it in theaters in Japan back in 2018.

As such, with me now fully understanding what was happening in this film (my Japanese is passable, not perfect), I can reiterate:

As a word of warning, Broly is a conditional film. What I mean is, depending on your level of familiarity with the Dragon Ball franchise, you will experience it in different ways.

I do think it speaks to the strengths of Broly that even a person unfamiliar with this franchise can appreciate many of this movie’s best qualities.

For starters, this film’s animation was perfect for a Dragon Ball story. Although I hesitate to call the visuals excellent – there were some notable instances of poor CGI – they delivered when it mattered most.

I will say this, Broly is easily the best-looking Dragon Ball production I have yet come across. Nowhere was this more apparent than in the action scene.

Now, if you think I just made a grammatical error, I didn’t. When I say “action scene,” I mean action scene – singular. Though it might have had combatants swapping out, there was only one real fight in the entire movie.

I recognize that it doesn’t sound great when an action film only has – for all intents and purposes – one action scene. However, this one fight encompassed the entire second half of the plot, and it was the best f@#$ing Dragon Ball fight I have ever seen.

I am not sure how to describe how incredible this battle was. It just starts and doesn’t slow down until the final credits.

Even without watching the Super series, you know how insanely powerful the titular Broly is if you know anything about Dragon Ball. For those unaware, he is one of the most devastating and dangerous opponents of the entire franchise because he has no power limit. The longer a fight goes on, the stronger he becomes.

From what little knowledge of Super I have, I do know that both Goku and Vegeta have reached a new power level that far and away exceeds the status of Super Saiyan. I’m not sure if red or blue hair signifies Super Saiyan God, but the point is, it takes an incredible fighter to go toe to toe with our heroes.

Broly managed to do just that before he even obtained Super Saiyan.

If you’re on an anime site, I hope you are, at least, aware of what a Super Saiyan is. If you’re not, then maybe you will want to hold back on this movie for the moment.

Nevertheless, when Goku, Vegeta, Broly, and even Frieza were going at it, the action was fast, hard-hitting, and exciting. Combined with an outstanding soundtrack, movements were swift and fluid. You could feel how grueling the combat was. And things only got more insane as the story went on. The pacing was well-timed for a 100-minute movie, and “well-time” has never been a typical compliment of Dragon Ball in the past. After all, this is the only franchise I know of that has stretched a five-minute event into ten episodes.

And without giving anything away, the final bout of this fight was pretty damn epic. Two fan-favorite characters got the chance to face one another.

While the animation and the action might have been spectacular, there was one aspect about Broly that turned it from a good Dragon Ball movie into a legitimately good film – Broly.

This story was a retelling of the title character, who has already made appearances in a trio of Dragon Ball Z movies: Broly – The Legendary Super Saiyan, Broly – Second Coming, and BioBroly.

Incidentally, if you would like to see Anime Hajime review all three films:

In this incarnation of the character, Broly has what we might call an innocent mind. Having grown up in banishment, Broly’s outlook on the world had been twisted by his revenge-obsessed father. Broly never learned to control his power through any means except fear. It also didn’t help that he was quick to anger.

Still, Broly wouldn’t attack without reason. Characters in this movie were capable of having peaceful conversations with him. Broly even expressed how he doesn’t enjoy fighting and would rather be left alone.

Unfortunately, when even a fraction of his power comes out, Broly quickly loses all sense of himself. Hence why someone like Goku is the ideal person to face him.

Unlike Vegeta, who is more likely to aggravate a tense situation and treat someone like Broly as a threat, Goku has only ever wanted to challenge strong opponents. And Goku knows when someone is enjoying a fight or not, which Broly wasn’t.

Broly was a character who you want to see kick-ass, as well as someone you hope can escape their circumstances.

I am glad to learn that my impressions of this film as I saw it in theaters, and in Japanese, have not changed upon this second viewing.

Broly is a stark reminder of why I enjoy this franchise so much. While watching this film, it was like I was a kid again.

There is no denying it; the first half of Broly is incredibly slow compared to the second.

Granted, this was when the most character-building and backstory took place. So, it wasn’t like we could ignore it.

Don’t get me wrong; this movie was in the right to define who its titular character was. This made it easy to root for and admire Broly when he was fighting.

However, was it essential to see the Eradication of the Saiyans again?

Sure, if you don’t know what I am talking about, its inclusion in the film was justified. But if I can be frank, who, other than Dragon Ball fans, are going about their day thinking, “I want to watch that Broly movie.”

I’ll eat my words if those people actually exist. Still, I’ve lost track of how many times I’ve seen Frieza destroy Planet Vegeta. To tell you the truth, my knowledge of this event was the only reason I could get past this part of the film when I saw it in theaters; I was able to fill in a lot of blanks.

Admittedly, a few details were changed to take into account Dragon Ball Super. There was no mention of a Super Saiyan God back in the days of Dragon Ball Z.

In case you haven’t noticed, this is nothing more than a nitpick of mine.

I can’t blame Broly for wanting to set up its story, which, after all, was a retelling of one of this franchise’s most popular characters.

Nevertheless, it is unmistakable when this movie really gets going.

Well, this was, undoubtedly, a whole hell of a lot of fun.

I won’t lie to you; I’ve never been impressed by a Dragon Ball movie. This one, on the other hand, was utterly fantastic.

Great action, great animation, phenomenal music, and the characters – old, new, and reworked – brought everything together.

But these were just my thoughts. What are yours? Have you seen this film? How would you advise Dragon Ball Super – Broly? Leave a comment down below because I would love to hear what you have to say.